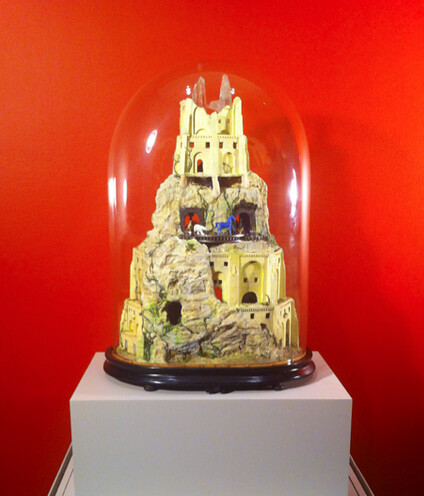 Magic Mountain is a kinetic diorama.  The basic structure was in place when I joined the project, so I had the challenge of designing mechanisms to fit in a tiny space.

The keystone feature is a ring that emerges between two archways and vanishes into the piece.  Since there is a faux-stone facade between the archways, a typical motor + attachment couldn’t be used.  The ring is a mechanism I designed to be able to fit in the existing dimensions of the model.  It’s similar to a planetary gear system, except it has no annulus.  The sun gear is welded between an upper and lower disc to keep it from falling down.  The outer three retaining, or planetary gears, are mounted in tracks that enable the tension on the sun gear to be modified.  They are also spring loaded to minimize whiplash and lengthen the longevity of the parts. 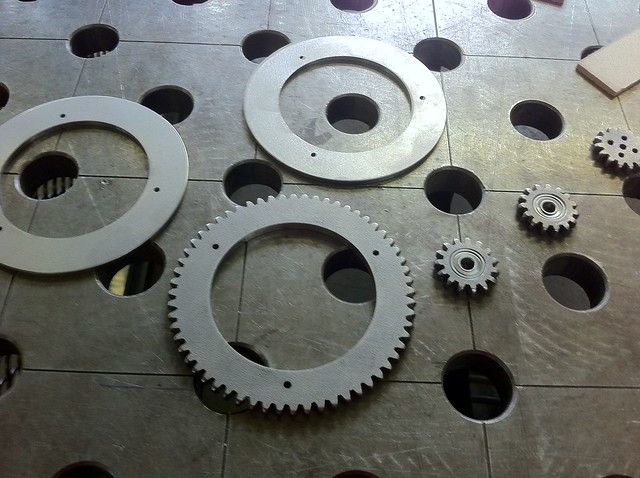 I designed the gears using Inkscape gear library and Rhino.  I had the gears water-jet in the Brooklyn Navy Yard, but the vendor didn’t tell me the tolerances would be off.  Lesson learned after five hours slack belt sanding fillets into the inner corners of every gear tooth to stop the gears from binding.

The second mechanism, triggered when onlookers step even closer, is a small porcelain figurine that ascends the summit of the mountain and daintily spins in three circles after clearing the illuminated rose quartz crystals at the top.  This mechanism is comprise of a box containing a modded servo motor.  The box itself had a tee-nut and bushing mounted inside of it to the box can climb up the drive shaft like an elevator.  Once the elevator and box hits it’s upper limit switch, the circuit triggers the servo to spin the boy three full rotations.  Below the boy is a small cam that slaps a sideways-mounted micro switch to count rotations.  Once the third rotation is complete, the boy descends until he hits the lower limit switch to finish the display.

The project uses an Arduino Mega, T-Rex motor controller, microSD mp3 player, and a Sharp IR sensor.  The piece was installed at the Rubin Museum in the Radical Terrain exhibit.

Artist interview for the Rubin Museum: 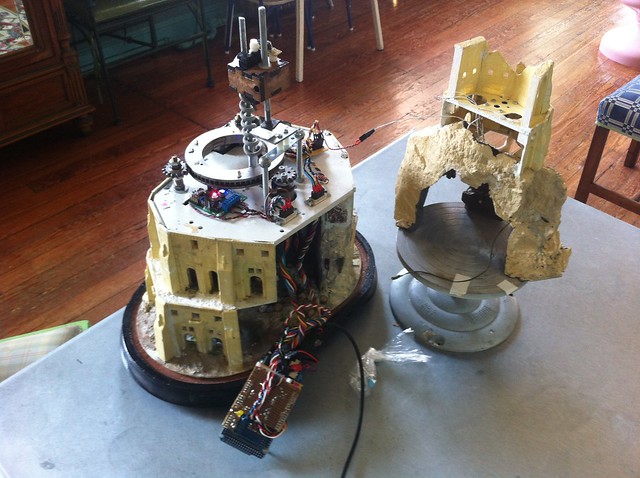 Elevator mechanism, consisting of dc motor driving the box between upper and lower limits. Limits are sensed by microswitches. When elevator box reaches the top limit switch, a servo motor (hacked to be continuous rotation) spins a figurine three rotations. I filed down a servo linkage to act as a cam to knock a side-mounted microswitch once per rotation.